“A true leader has the confidence to stand alone, the courage to make tough decisions, and the compassion to listen to the needs of others. He does not set out to be a leader but becomes one by the equality of his actions and the integrity of his intent. – Douglas McArthur

M. R. Latiff, a lion hearted legend, renowned for his exemplary commitment to the mission he was tasked with – a mission to protect his country from the tyrannical forces that threatened to destroy the sovereignty and unity of the motherland. The erstwhile Commandant of the Special Task Force (STF) and Senior Deputy Inspector of Police – his illustrious career spanning over 40 years, leaves a legacy of profound patriotism and love for his country and people. “We owe a great debt to leaders of this caliber as they have run the gauntlet and proudly brandished the flag of freedom throughout the world. ”

His stature belies the inner strength of a warrior earmarked for victory and yet while he has all the right to sound his victorious yawp across the rooftops of the world, Latiff wishes to refrain from the limelight and remain rooted and grounded to the soil of the land that he fought so valiantly to secure. Yet, his selfless actions have gained the admiration of his compatriots and while he shuns from speaking about his remarkable exploits, there are many who are in awe and wish to share what this icon has done for his country. His actions have had a ripple effect, leading to the freedom from tyranny which you and I are enjoying at this moment.

Surmise it to say, Latiff spearheaded a force that defeated terrorism through sheer courage and professionalism, leading by example and manoeuvering dangerous missions from the frontlines with smooth precision – which was necessary to end civil strife and restore harmony in Sri Lanka. Looking at the expanse of the land which was controlled by the terrorists and their evil machinations, one would have deemed them invincible as they had entrapped the international community who were misled by their propaganda, yet with fearless leaders such as Latiff in the forefront, the plans of the enemy came to a crumbling halt and we, as citizens of this land are eternally grateful to God for amazing individuals such as Latiff, who always put country before self.

Graduating from his alma mater Royal College, Latiff enrolled in the Police Force as Sub-Inspector in the year 1979 and by virtue of his stellar achievements he was duly promoted in rank. Latiff gained a master’s degree in Human Rights from the University of Colombo and had also studied at Fort McNair University in USA. As civil strife anarchy implored in the country following the Black July carnage in 1983, Latiff was among the first batch of elite fighters trained under the British and aptly named the Special Task Force (STF). “He always led from the front which was indeed his specialty and endeared him to his subordinates. Yes, he was a strict disciplinarian and punctual to a fault but never a dictator as he earned the respect of all who knew him. Here was a man who walked the proverbial talk and that drew the admiration of his peers and comrades but inadvertently drew the ire of his nemesis – the terrorists. He along with many others of his ilk, were responsible in repeatedly thwarting the attacks of the enemy. Specialising in counter-terrorism, he was also appointed as the intelligence officer overseas and foiled the plans of the terrorists which lead to the eventual victory.

Latiff went beyond the call of duty and while his exploits in the field of battle is legendary his magnanimous efforts are truly extraordinary. His affinity towards sports, especially rugby was the inspiration in ensuring the landmark achievement of the Police rugby team as runners up in the League championships after a hiatus of 25 years.
He also laid the groundwork from the educational structure to the legal framework in the formation of the National Police Academy and served as its Director. He also served as DIG Badulla District, DIG in-charge of police training, exams and recruitment among other appointments. His distinguished career included serving as a diplomat in Sri Lankan embassies in several countries as First Secretary. He also represented the country in numerous international defence conferences and was declared a Global Expert in Internal Security and Defence by the United Nations.

“In recognition of his esteemed service, he was awarded the prestigious Deshabandu award and the Pride of Asia awards for his exemplary dedication of service. He was also awarded the Outstanding Citizen award by the Lions Club”

His tenure as Commandant of the STF saw a major anti-drug campaign and the suppression of many illegal activities such as the transportation of contraband among others. He took a bold stance against political chicanery and faced adversity with a resilient spirit that was in a class of its own.
Moreover, in recognition of his esteemed service, he was awarded the prestigious Deshabandu award and the Pride of Asia awards for his exemplary dedication of service. He was also awarded the Outstanding Citizen award by the Lions Club.

Imbued in his character was the staunch sense of compassion towards a fellow human being and the willingness to help at any given time. “He was the ‘go to’ person for anyone seeking support,” enthused his comrades who also marvel at his elephantine memory. “We at the Police were identified with our numbers and even after a long period of time he would remember the number of a person and recall the instance he first met them. These were some of the glowing attributes he was renowned for by those who had the privilege of associating with such a remarkable persona.

A debt of gratitude

The country owes a great debt of gratitude to this fearless and widely respected emissary who always acted on principle and carried out his tasks with unquenchable zeal, penetrating the fortifications of the deadly terror organisation who eventually capitulated to the forces – paving the path to peace. He was also instrumental in steering the Special Task Force and the Sri Lanka Police to mercurial heights. 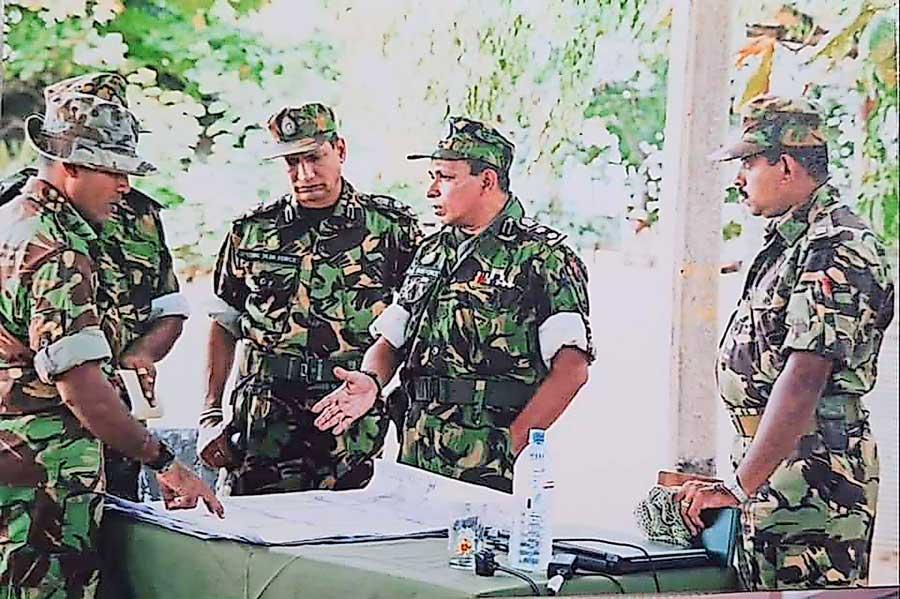 I believe that everyone has a story to tell and in turn, I love listening to those stories, attempting to paint a picture to my readers with my words. I may not be an artist or painter, but I believe words can create powerful images in ones mind and it is how we share our stories with others.
No votes yet.
Please wait...
Voting is currently disabled, data maintenance in progress.
0
SHARES
ShareTweet